UP Board solution of English Chapter 1 UP Board Class 12th Flamingo Chapter 1 My Mother at Sixty Six (Poetry) Book in English & Hindi Medium- gyansindhuclasses. Written By Kamla Das. Up Board English For Hindi & English medium students. 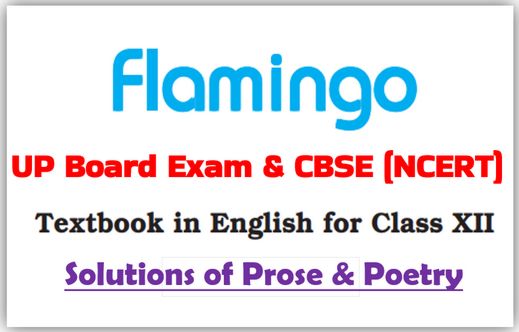 Chapter I My Mother at Sixty Six (Poetry)

The poem starts with the journey of the poet with her mother to Cochin on the morning of last Friday. The poet noticed her mother sitting beside her, who was dozing and open mouthed and her face was colorless like ashen and corpse. At that, the poet realized that her mother had grew old but soon separated those thoughts. And outside, there seemed young green trees, enjoying children.

Then reached airport and standing far looked her mother, found wan, colorless like winter’s moon and old pains and childhood fear returned but the poet said to meet soon and while parting continuously smiled.

1.Driving from my parent’s

morning, I saw my mother,

Ans-  What was the poet’s mother doing in the vehicle?

Ans-  How was the face of the poet’s mother looking Sel like?

(2) pair and realised with

that she was as old as she

put that thought away,

Ans-  After seeing her mother’s face, the poet realised sts that she (her mother) was as old as she looked.

Ans-  With realisation, the poet felt the pain.

Ans-  . The poet put that thought (the thought of her mother’s oldage) away.

(3).and looked out at Young

out of their homes, but after the airport’s security check, standing a few yards

away, I looked again at her.

1-What did the poet see outside the vehicle?

Ans-   The poet saw young trees sprinting, the merry children outside the vehicle.

2.What happened at the airport?

Ans-  At the airport, security check was done.

3.What did the poet do at the airport?

Ans-  At the airport, the poet again looked at her mother standing a few yards away.

as a late winter’s moon and felt that old

but all I said was, see you soon,

Ans-  The poet’s mother was looking wan, pale and she was compared with a late winter’s moon.

Ans-  At the time of farewell, the poet only said that she would see Amma soon and she (the poet) remained only smiling till the end.

1.The narrator is only using her smile to:

(b) make herself happy

(c) to make her mother happy

(d) to make her father happy

3.The narrator again compared her mother too:

4.’Trees sprinting’ is a poetic device. It is :

6.The person in the car, beside the poetess, was:

9.Whose house the poet was leaving?

(a) her friend’s house

10.Why does the poet feel parted, upset and sad?

(a) because of her fears

(b) because she was getting late

(c) fear of missing her flight

(d) because of her duty towards mother and her own needs(✓)

(b) home to Cochin

12.Which Rhyming scheme is used in the poem?

13.Why did the poet look at her mother again?

(a) because she was busy

(b) because she was going away

(c) because she wanted to stay back

(d) because of fear and insecurity(✓)

14.What is the universality of the theme of the poem?

(b) Life is a reality

(c) everyone is happy

(d) children screaming at her

(a) Pangs of headache

(b) Pangs of stomachache

20.What was the poet’s childhood fear?

(a) Parting from her husband

(b) Parting from her friends

(c) Parting from her siblings

UP Board Solution Of English Full Book